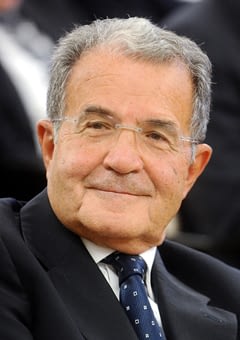 He helped establish the « Italian school of industrial policy », and acted for several years as the editor of its quarterly journal, L’Industria, Rivista di Economia e Politica Industriale.
In 1981 he founded Nomisma, the largest Italian institute of economic studies, whose scientific committee he chaired until 1995.

From November 1978 to March 1979, Romano Prodi was Minister of Industry.
From November 1982 to October 1989, he was chairman and CEO of the Institute for Industrial Reconstruction (IRI), which was the largest Italian public holding.

Recalled to head the Institute in 1993, he saw through the privatization of a number of industrial, banking and service companies.
In February 1995 he founded the « Olive tree » centre-left coalition, which designated him as its candidate for premiership.

The coalition won the 1996 election and, in May 1996, he was appointed Prime Minister. He remained in office until October 1998. The bold measures introduced by his Cabinet enabled Italy to meet the Maastricht criteria for joining the Euro zone.

From 1999 to 2005 he has been President of the European Commission. During his presidency, the euro was successfully introduced, the Union was enlarged to 10 new countries from Central, Eastern and Southern Europe and the treaty establishing a Constitution for Europe was signed.

In 2006 Romano Prodi was elected leader of the centre-left coalition in Italy and after a victory in the 2006 elections he became Prime Minister, until May 8, 2008.

He is, since then, President of the Foundation for Worldwide Cooperation and in July 2008 he has been appointed as Chairman of the United Nations-African Union High-level Panel for Peacekeeping in Africa.

From February 2009 to December 2013 he was Professor at-large at Brown University (USA) and rom 2010 he is Professor of CEIBS (China Europe International Business School) in Shanghai.

From October 2012 to January 2014 he served as the Special Envoy of the Secretary-General for the Sahel.

During his academic and institutional career, Romano Prodi has been awarded a number of recognitions and he also holds various honorary degrees.