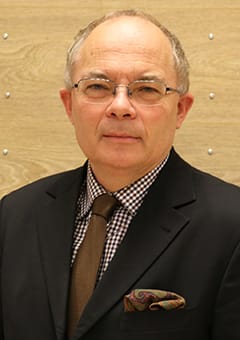 Jacques-Pierre Gougeon is a University lecturer and a Senior Research Fellow at IRIS, specialised on Germany, its diplomacy, its institutions and its policy. He heads the Observatory on Germany created in 2022.

Along with his research and teaching activities, he has held positions of responsibility in the senior civil service, as an advisor to the Prime Minister, then as a Recteur d’académie, as well as in the diplomatic service, as a cultural advisor in Berlin and Vienna, where he jointly directed the French Institute.

On the occasion of the celebrations of the fall of the Berlin Wall, he coordinated a special edition of “La Revue internationale et stratégique” on “Germany : a new power ?” (IRIS Éditions, 2009).

What’s more, he is an agrégé in German and was a member of the jury for the agrégation.