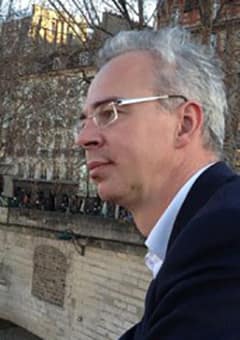 Emmanuel Lincot is an Associate Research Fellow at IRIS.

Born in 1970, Emmanuel Lincot is Professor at the Faculty of Arts of the Catholic Institute of Paris and attached to the UR “Religion, Culture and Society” (EA 7403), where he directs a research seminar: “The Routes Silk: circulation of ideas, influences and cultural issues”. Doctor of Letters, Ability to direct research (HDR), graduate of the Ecole Pratique des Hautes Etudes (IV ° section) in art history and holder of a canonical degree, he directs a number of doctoral theses.

Specialist of political and cultural history of contemporary China where he lived several years first as part of the National Service Cooperation (CSN) as a lecturer of French language and civilization at Wuhan University and later on as a documentalist at the French Embassy in Beijing. He is also interested in the peripheral regions of China, especially Central Asia. Associate Researcher at the Institute of International and Strategic Relations (IRIS), he teaches and is co-editor-in-chief of Asia Focus magazine. Visiting professor at the Catholic University of Lille, he is also involved with many foreign universities including: Chicago University, UCLA, Notre Dame University, Sun Yat-sen University (Kaohsiung, Taiwan), Institute of Diplomacy (Beijing, China) , Fudan University (Shanghai – China), Sichuan University (Chengdu, China), Chinese Academy of Social Sciences (Beijing).

President of the agency “Signs and Strategy”, he advises in the field of semiotics applied to the industrial world in the Chinese context. He is also regularly consulted by the French Presidency and Matignon for Chinese affairs for more than ten years. He accompanies politicians and businessmen in Asia (China and Central Asia) on incentive trips focused on raising awareness of the major geopolitical and cultural issues of the contemporary world. Recipient of the Taiwan Fellowship and Survey, he directed the first Massive Online Open Course (MOOC) on “Geopolitics of China” in partnership with France Université Numérique.