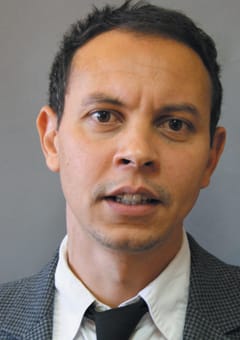 Robert Chaouad is a Research Fellow at the Institute for International and Strategic Affairs (IRIS), specializing in European Union questions. He holds a PhD in Political Science. He defended his dissertation in 2004, titled « A History of the Concept of European Defense », at the European Studies Institute of the University Paris 8 (France). He was looking at the process by which the European Union tried to build itself, or not, as a military and political actor in international relations.

Robert Chaouad is also lecturer at the European Studies Institute of the University Paris 8 and at the School of International Affairs, IRIS Sup’. He was Editor-in-Chief of La revue internationale et stratégique, a quarterly journal published by IRIS.

Previously, he worked as an analyst for a cartography and prospective institute, where he contributed to a geopolitical TV program, Le dessous des cartes (for the Franco-German channel Arte), and to a prospective research program « The Futures of World ».

He has published many articles and he was the editorial coordinator of several books and review issues of The International and Strategic Review (n° 82 « The New Strategic Thoughts », n° 88 « Forgiveness and Reconciliation in International Relations », n° 91 « The Year 1973 in International Politics »). He also participates in institutional research programs.