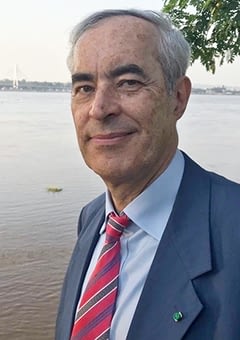 Nicolas Normand is an Associate Fellow at IRIS specialized on the Sub-Saharan Africa region and an Honorary Minister Plenipotentiary.

He dedicated most of his diplomatic career to African issues by practicing for almost 15 years as First Counsellor at the French Embassy in South Africa, as French Ambassador in Mali, in the Republic of Congo, in Senegal and in Gambia, and as Africa Councilor at the French Ministry of Foreign Affairs in Paris. He was also the Deputy Director of IHEDN.

Former AgroParisTech, ENS and ENA student, Nicolas Normand is also a teacher-instructor in Africa (Kinshasa and Nouakchott) for Themiis, the vice-president of Teriya-Amitié Mali Association, and an Associate Justice for the National Court for Right of Asylum.