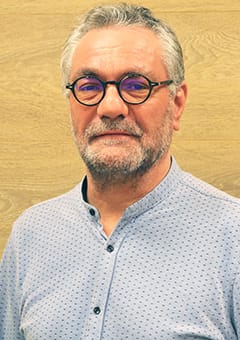 After studying urban planning, a world tour and seven years in the family forestry business, Antoine Petibon joined the association Action Contre la Faim (ACF) in 1994 where he had worked for almost seven years. He worked in the field in West Africa, Central America and the Caucasus, in the fields of logistics and general coordination. He was quickly identified for emergency operations in areas of high security degradation and/or where large-scale programs required significant financial and human resources.

Then, Antoine Petibon worked with Solidarités International and the United Nations (OCHA) both at headquarters and in the field. His two missions with UNOCHA and DFID (the United Nations Office of Humanitarian Affairs) in Iraq and Liberia ended his expatriation period.

It was during the response to the tsunami disaster in December 2004 that he joined the French Red Cross as the Asia desk Officer in charge of the affected area. Between 2005 and 2009, he was in charge of Asia, then the Pacific and the Middle East, and finally coordinated all the international activities of the French Red Cross in the 42 countries covered that year. As the Head of international operations and as Deputy director, he was also in charge information systems and the process approach.

For several years, Antoine Petibon participated in the training of humanitarian correspondents in French embassies, as well as in the National Council for Development and International Solidarity (CNDSI) and in the Humanitarian Consultation Group (HCG) as a substitute teacher. He has been from the outset a member of RiDO, the informal meeting of directors of operations, .