Digital Euro Would Help Stave Off Corona-Depression and EMU Breakup 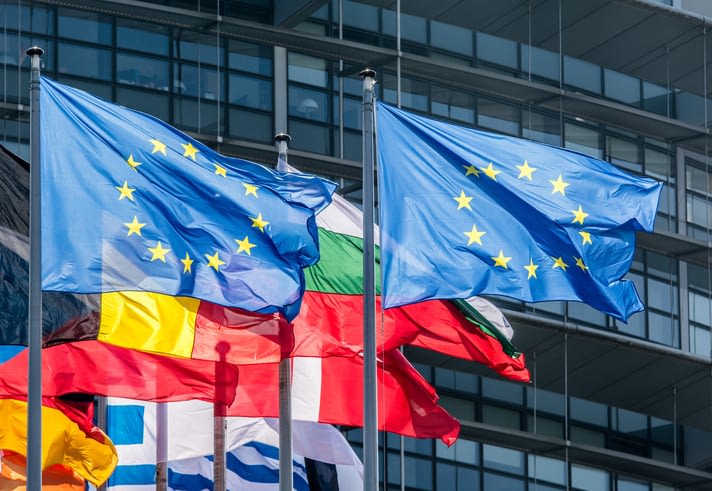 Excessive expectations have grown that Euro nations could, despite their lack of coordination and solidarity, develop their common fiscal ‘bazooka’ and agree on issuing mutualised ‘eurobonds’ to fight the pandemic. While any such concessions towards fiscal federalism by northern member states would remain symbolic, the political taboos over monetary action have proved somehow more manageable, in the face of euro breakup risks. In order to provide more direct backing to real economic efforts, the ECB should be allowed to tailor its purchases to member states’ crisis needs and signal it will perpetually refinance pandemic-related public debts, rather than simply flood markets for a period of time. More innovatively, it should also speed up projects of a digital euro, which national central banks could directly issue to individuals and businesses, to compensate them for part of their lost income. An interview with Rémi Bourgeot, economist and IRIS associate fellow.

The 27 EU finance ministers have allowed member states to breach the 3 % public deficit ceiling, and have discussed the possibility of using the European Stability Mechanism (ESM), launched during the debt crisis. Will these steps make it possible to contain the economic crisis ? Should we go further ?

An economic depression is brewing in Europe and across the globe, with a halt to activity in a great many sectors, against the backdrop of an economic system already severely weakened by the previous global crisis and by the euro crisis, particularly in the south. The vicious circle of falling demand, the sudden deterioration in the cash position of corporations, whose debt levels had grown fast over the past decade, and the weakening of banks clearly presents a systemic risk. This situation could last well beyond the pandemic itself. Political responses are therefore starting to move outside established frameworks, towards ways of breaking this vicious circle, in parallel with the health front. This is leading governments to develop, though very gradually, various types of assistance, both in supporting businesses and trying to maintain workers income. The traditional instruments of fiscal and monetary support are not, however, likely to stop this cycle of depression, particularly in the context of the monetary union. New avenues have to be explored, circumventing a number of monetary taboos.

We must bear in mind the potential order of magnitude of the fiscal impact, in particular of the measures needed to support businesses and workers, which are being imposed increasingly quickly on the countries affected, in order to curb the collapse of both supply and demand. Total amounts, if they are commensurate with the actual threat, could approach 20% of GDP, and grow further as the pandemic evolves. The amounts of the emergency plans, announced by European governments, are in this respect a kind of starter, despite the already substantial amount of €150 billions recently announced by the German government for the unfreezing of its debt.

While such a situation may be manageable for some rare countries in the world with a relatively stable economic structure and low public debt, highly indebted and weakened economies will need new instruments to deal with the consequences of the current tragedy. In this context, in addition to the suspension of the Stability Pact in the Euro zone, mention is indeed made of the €410 billions currently available from the ESM. This amount can be valuable, all the more so as a country’s access to this euro area, rescue fund can be accompanied by access to OMT operations, i.e. potentially unlimited purchases of the country’s debt securities by the ECB on the secondary market. However, the size of this mechanism is insufficient in the face of the current challenge and it is still officially conditional on drastic austerity measures. European leaders have therefore discussed amendments, in order to adapt this scheme to the health disaster and the need for massive support, but they have failed to reach any significant agreement so far.

In addition, there has been renewed discussion, particularly in France and Italy, of Eurobonds, renamed ’corona-bonds’ for the occasion. Over the past decade, German political opposition to the idea of debt-pooling has been very strong and has grown even stronger with the rise of the AfD. And the general tendency in recent weeks to retreat into a national approach, marked by a notable lack of solidarity with Italy, is not likely to meet such expectations… Any concessions towards fiscal federalism would remain very limited in aim and scope. To such an extent that, in the face of the developing depression and risks of a Euro zone breakup, some monetary solutions, which would have appeared inconceivable just a few weeks ago, now seem more politically accessible and more economically desirable.

After a series of setbacks, the ECB has managed, with this announcement, to maintain, for the time being, a certain control over the borrowing rates of those countries most seriously affected, such as Italy. This measure is mainly focused on financial markets. The aim is both to flood them with liquidity in order to maintain lending channels as far as possible, but also, and above all, to assert the integrity of the euro area. This followed Christine Lagarde’s much criticised statements that the ECB was not ‘here to close spreads’ in borrowing rates among European economies. Beyond this faux pas, the ECB President rightly laments the lack of budgetary action and coordination among European governments. In any event, monetary action is more necessary than ever to address the risk of a depression, and, in this respect, the ECB’s step to lift the limit on the share of a country’s debt it is allowed to purchase is welcome. This time, however, monetary support will have to be much more anchored in real economic needs if it is to be efficient.

The massive monetary stimulus of recent years had consisted in flooding financial markets in order to spur lending, at the risk of creating major asset and real estate bubbles, at a time when European governments were unable to agree on a new form of cooperation and real rebalancing. The productive and logistical deficiencies, which have grown further against the background of those imbalances, now tend to aggravate the effects of the pandemic.

The purchases announced by the ECB make it possible to provide liquidity at a time of severe financial stress and to exercise some control over borrowing rates, but do not constitute a crisis management plan per se. In order to be efficient, it will have to more explicitly support governments, which will have to implement much more far-reaching programs than what they have already started to announce, in order to curb the spectre of depression. However, it is difficult to imagine that the spiralling debt of various countries will be substantially covered by the state coffers of Germany and other northern member states, where this taboo remains too strong. Only indirect means seem conceivable. In particular, the ECB’s massive purchases could constitute financing for governments, if it is understood that the issuance of pandemic-related government debt on the bond market – at very low or even negative rates – will have to be constantly refinanced by the central bank in the future. In that case, this would simply be a type of state financing – legitimate, in the current context – by the central bank, without breaking the taboo too head-on and limiting this violation of the ECB’s mandate to the health crisis. We could, in this case, go so far as to assess the levels of public debt, in the future, putting these amounts in a dedicated category. These bonds – indirectly equivalent to perpetual bonds bearing near-zero interest rates – could even be called ‘corona-bonds’ in reference to the distinct Eurobond-type solution mentioned above.

Although this type of approach does, indeed, violate the monetary rules in force, it is clear that political thinking worldwide is moving irrevocably in this direction, in the face of the massive exogenous shock of the global pandemic. However contrary it may seem to the ECB’s rules against state-financing, this approach is much more likely to be tacitly accepted by northern member states than any significant and explicit debt-pooling project. In short, the taboo on central bank independence is, in reality, weaker than the taboo on fiscal solidarity, especially in the face of clear euro breakup risks. With regard to Germany in particular, distinction must be made between the original ordoliberal doctrine focused on monetary stability and the political significance of its invocation in recent years in terms of European relations.

Other more innovative, and more technological solutions should, however, also be considered, including a digital euro, building on and somewhat reorienting existing projects. The notion of a highly centralised and traceable digital currency tends to prompt understandable criticism among a number of crypto-enthusiasts. Central bank digital currency (CBDC) projects are indeed quite distinct from decentralised and wildly-fluctuating crypto-currencies of the Bitcoin type. CBDCs might, however, prove to be of crucial importance, not only in fighting exogenous shocks or deflationary trends in a targeted fashion, but also in shifting towards a more stable financial system, progressively moving away from the fractional reserves logic, in which commercial banks are responsible for money creation. A digital euro would also be quite distinct from the unmanageable dual currency projects, which have been mentioned at times, mostly as a bargaining chip in European debates. Whatever architecture is reasonably considered, CBDC is genuine central bank money. It is equivalent to a digital version of cash, i.e. money that is a claim of economic agents on the central bank, as opposed to deposits with commercial banks, which are mere claims on the latter (backed by some state guarantees though).

CBDC, in an exceptional accounting framework, could be issued in sufficient quantity, but in a targeted manner, without relying on financial transmission channels. Although there is little hope that such projects would be attempted in Europe in the first place, this digital money would be allocated by the ECB or national central banks (the latter being already largely responsible for cash issuance) not to governments, but to corporations and individuals, in order to compensate for part of the missing income linked to the pandemic, and to break the propagation chain of the systemic crisis. This would be a targeted type of helicopter money, introducing central bank digital currency to economic agents directly, or via financial institutions used as direct intermediaries in this case, as opposed to the very indirect nature of quantitative easing and its many side effects.

For some, this crisis reveals the inadequacies of the European Union as a political entity, as its Member States preferred to respond nationally to the Covid-19 crisis, and the only collective measures concerned economic decisions. Do you think that the European project will come out of this episode damaged ?