How Climate change challenges the US Department of Defense?

Interview
Interview with Sherri Goodman, a Senior Advisor for International Security at the Center for Climate and Security and a Senior Fellow at the Woodrow Wilson International Center and CNA, former President and CEO of the Consortium for Ocean Leadership. 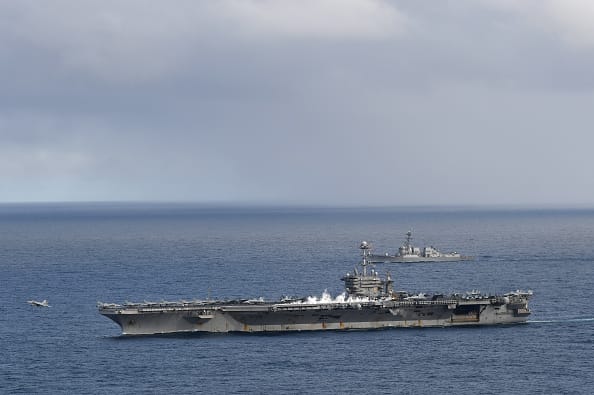 Why climate change is a growing interest for the department of defense in America and since when?

In the US, we have recognized climate change as a threat multiplier for instability, amplifying other threats, since 2007 when the Center for Naval Analysis released its first report of the Military Advisory Board – a group of generals and admirals that I organized at the US Center for Naval Analyses – to address these issues. Since that time, US defense strategy documents have recognized climate change as an aggravator of instability and conflict. Now also recognizing the impacts to our forces where they are deployed today. For example, our current Secretary of Defense, Jim Mattis, has said that climate change is affecting our forces where they are deployed today. As such, this is a clear recognition of the impacts to the military bases and infrastructure from sea level rise and growing extreme weather events both in the US and overseas.

Can you give an example of military infrastructure damaged by a particular natural disaster in recent years?

We know that over 30 critical military bases in the US are already seriously affected by the sea level rise. For example, the world’s largest military base in southern Virginia – NS Norfolk which also includes a NATO base –is subject to the combination of sea-level rise, storm surge and coastal inundation. In other words, the land is sinking. They already face what we call ‘Sunny Day Flooding.’ It would be more like a sunny day but the water would be in the streets, and the people would not be able to go from their home to the base in order to work because of the regular flooding.
Now naturally the question comes: When the infrastructure has to be improved or make more resilient? How to account for rising sea levels and additional extreme weather events amplified by climate change? We acknowledge all these effects on flood standards. In other words, historic standards for flooding and our historic maps for flooding are no longer valid. We see that now with the recent Hurricane Florence and the inundation of the coastal area in the North Carolina which also included some important military bases such as Camp Lejune and Cherry Point – two very important marine corps bases which has been affected by flooding and power loss during the storms.
Also, we see more wildfires in the US; we also see them in the world. Sometimes they get amplified by the heat which increases temperature across the US West and even in Alaska. Our military provides additional backup supports to local firefighters in the West to combat wildfires. When there are too much heat and smoke, our forces cannot fully train properly which are already having an impact on the readiness and the training. We call it a ‘Black Flag Day’ when the temperature is too high and thus, forces cannot safely train as that will affect their health.

There are different points of view on climate change inside the US administration. What is the ratio of pro and anti-climate change holders?

As you know, climate change is not a priority in the current administration as President Trump has said that the US will withdraw from the Paris Agreement although that has not formally happened yet. There are many working within the defense department including the Secretary of Defense who have recognized that climate change is affecting our forces today and that affects our strategic position around the world. When the Secretary of Navy was asked by the Congress, “Why the navy is focusing more this year to have presence in the Arctic?” He replied to the Congress saying, “Well, the damn thing melted.”
The US military is actively considering how to increase its presence in the Arctic which is primarily affected by the fact that the sea ice is melting, the permafrost is collapsing, the temperature is rising and a whole new ocean has opened up in our lifetime. Our NorthCOM Commander has stated that that the US needs to be able to operate ‘in and through’ the Arctic. This is a new formulation in the US because historically we positioned either below the surface or up in space. Now we need to focus as well on surface ships and on land forces. But now we have realized that there is much more human traffic in the Arctic from additional tourist ships to transit vessels that are seeking or transporting energy or minerals. Chinese, Russians and many others are now very active in this region and so, there is a need to really rethink how we operate in this whole new region which until a decade ago was mostly seen as more remote and frontier area.

Your article on China mentions that Japan is worried that diminished US leadership in climate change can also impact on US’s influence in Asia and might also give more space for China to rise. Can you please explain this?

I deeply worry about the vacuum created by the absence of climate leadership in the US right now at the highest levels of the government. There is a lot of good work going on in the defense and military departments at the working levels. But when the President declared that he is going to pull the US from the Paris agreement, President Xi Jinping of China said “we are going to be climate leaders” and now they are using that soft power to enhance their global influence, particularly in the Asia Pacific region. I think we have to be very concerned about that. China, by virtue of its position in Tibet, controls most of the headwaters of the major rivers in Asia and is in a position to monopolize that water. It has worked cooperatively with many others in the region, thus I will not say it will not continue to cooperate. However, it will cooperate from the position of strength.
In the US we talk about utilizing all elements of national power and that includes our military forces, diplomacy, economic tools and trade. In the current era, it also includes climate leadership and diplomacy, as well as clean energy and resilience building, particularly in the Asia Pacific region where you have so many nations and people who are completely vulnerable to the effects of rising sea level and increasing extreme weather events. We should not be in a position where China is the only country that can come to rescue. We need to have a combined allied presence that we had across the Asia Pacific region for decades since World War II. Japan is our very strong ally as well as Australia. The French and the Americans have a strong partnership. Today this is a region where I think we should continue to show leadership and presence.

Since the US President wants to withdraw from the Paris agreement, apparently the French President wants to fill the vacuum created by the US. Even he was awarded as the Champion of the Earth recently – during the 2nd One Planet Summit in September 2018. Do you believe France can fill the gap in global leadership in climate change?

I think France plays a very important role in climate leadership by virtue of its presence in Europe and its global activities. President Macron also seems to have a good relationship with President Trump. I think President Macron has an opportunity as President Trump has announced withdraw from Paris agreement. With current President, you never know when a debate is fully over. I know that even in his party and administration some people think that there might be opportunities to rethink the decision to pull out of the Paris Climate Agreement. I think the French President should continue to show global leadership as it helps humanity and also keeps the fire alive. I believe US Climate leadership will be back. It is really just a matter of time but we need to keep pushing.